We're rounding things out with the Air Division, the home of former powerhouse Libra, winners of _ previous Fantasy Astrology championships, but whose reign of terror ended last year when they didn't even win the division. Actually, the Scales technically didn't NOT win their division, as they finished with an identical record as Gemini, but ESPN's proprietary "points for / points against" system awarded the Twins with the victory; they would eventually go on to win the championship. But as Libra is slated to be on top once again this year, let's start with them. As a reminder of the scoring system, signs gets 5 points for each Tier I player in their talent pool, continuing in descending order, finishing off with 1 point per Tier V player. And the color coding is as follows: Green = Tier I, Blue = II, Yellow = III, Red = IV, Purple = V 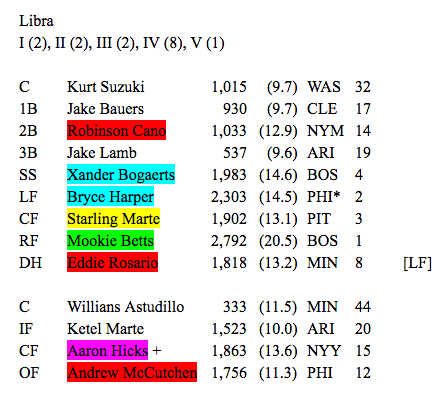 Despite the presence of only one Tier I batter, this outfield is by far the strongest in the astrology landscape, due to its incredible depth. AL MVP Mookie Betts leads the charge, and he's followed closely (albeit one tier town) by the owner of the richest contract in MLB history Bryce Harper, who hopefully doesn't show any lingering effects from being hit by a pitch on the ankle just a few games into his first Spring Training with the Phillies. The defensive prowess of the team's lone Tier III batter Starling Marte means that he would hold down center field in real life or a simulation, but Harper qualifies there as well for 2019, despite his poor defensive performance. Tier IV's Eddie Rosario and Andrew McCutchen could serve as a pretty serious DH platoon, while Tier V Aaron Hicks will provide yet more center field insurance when he comes off the DL. In the middle infield, Xander Bogaerts and Robinson Cano would make a fine double play combination, depending on whether the latter has truly cleaned up his PED act. 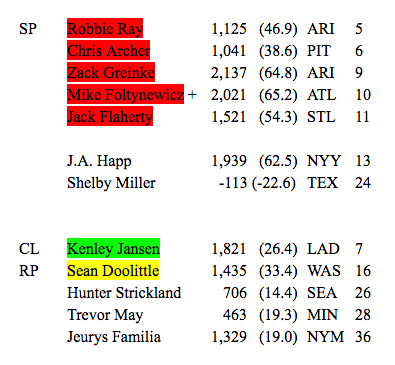 The Libra rotation has the curious distinction of being filled entirely by Tier IV starters; or it will be once Mike Foltynewicz is healthy enough to take the field. Until then bounce back candidate and former Team USA ace Chris Archer and lefty strikeout artist Robbie Ray will lead the pack. Those two will be followed by the most expensive pitcher in the sport (in terms of AAV) Zack Greinke and burgeoning Cardinals top of the rotation presence Jack Flaherty. In the bullpen, Dodgers star Kenley Jansen is hoping for a smooth recovery from offseason heart surgery, for both professional and general health reasons. Still playing out the extension he signed with the A's, Sean Doolittle flashed numbers that were superior to his Tier III standing, but staying on the field is always a challenge with him. 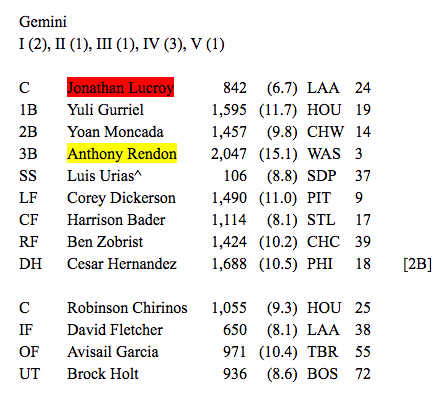 The fact that Gemini "won" the Air Division last year has almost everything to do with its pitching staff, and very little to do with a fully uninspiring offensive group. Pending free agent Anthony Rendon tops the bunch, and only a very deep crop of third basemen drops him all the way down to a Tier III standing. I don't  know if he's first-round-pickable, but he's definitely extension material for a Nats team that has come to terms with multiple Scott Boras clients before him (but then again, they also just let the biggest one walk away). Even a Tier IV placement for catcher Jonathan Lucroy assumes that he'll return to the solid offensive production that marked his early career, although even if he doesn't, I'm still salty that the A's allowed him to go to their in-state, in-division rivals rather than re-upping him after his magnificent work handling an unproven pitching staff. It's still unclear whether Luis Urias will gain shortstop eligibility, but until that happens, Brock Holt can hold down the fort. 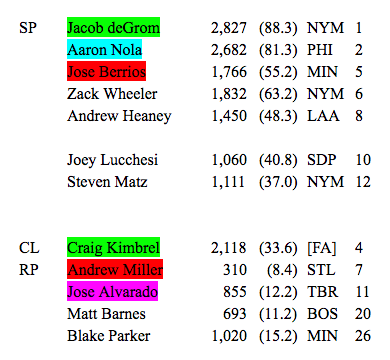 NL Cy Young Award winner Jacob deGrom headlines a deep and exciting starting staff that quite litrally carried this team into and through the Fantasy Astrology postseason last year. Recently extended Phillies ace Aaron Nola was no joke either, and it remains to be seen if new Mets GM Brodie Van Wagenen will follow suit with his former client. Staying with the extension theme, Jose Berrios declined the latest offer from the Twins (Minnesota) to lock up their young ace long term, but that development might make the Puerto Rican hurler that much more motivated to perform. The success of the Twins' (Gemini) bullpen is heavily predicated on when (whether?) Craig Kimbrel signs with a team prior to the 2019 season. New Cardinal Andrew Miller has been a high-leverage relief stud in the past, but he's coming off an injury-plagued season, and there's no guarantee that he'll see save opportunities with flamethrowing Virgo Jordan Hicks slated for the closer's role. Tier V reliever Jose Alvarado could end up getting the bulk of the ninth inning appearances for the Rays, but it's hard to count on any pitcher who plays for a team that's actively upending traditional roles throughout their staff. 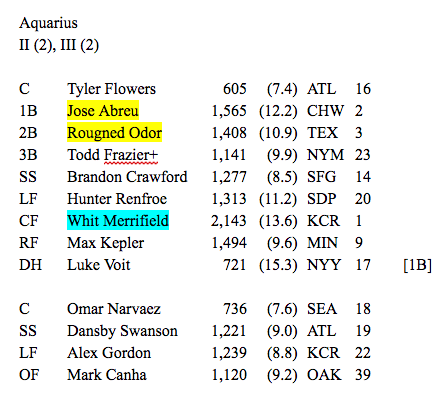 Bringing up the rear, as they always seem to do in the Fantasy Astrology league, is Aquarius, a sign with only four tiered players on their entire roster - one less than the Libra starting rotation alone. Mutli-positional threat Whit Merrifield is a true fantasy asset for any team, and his ability to play the outfield alleviates a fairly significant roster logjam (allowing Tier III second baseman Rougned Odor to get into the lineup), but he's not necessarily the kind of player you want to headline your team with. It's possible that the White Sox's acquisition of Aries benchwarmer Yonder Alonso will keep Jose Abreu fresh with more at bats as the DH, but it's also possible that the DH penalty exists, in which case the Water Carriers would really be in trouble. 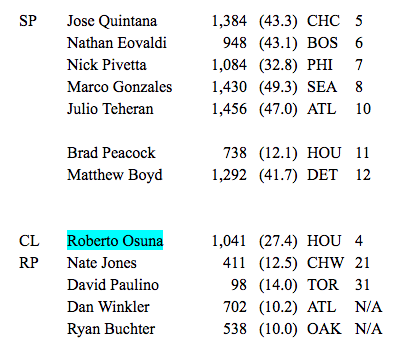 Speaking of being in trouble, this sign's only tiered pitcher found himself on the receiving end of a whopping 75-game domestic violence suspension last season, but despite that, Roberto Osuna is slated to close games for the heavily favored Houston Astros in 2019. Interestingly enough, another domestic violence suspension server, Addison Russell, is also a member of the Aquarius talent pool. Since there are no more tiered players to talk about, let's examine an astrological divisional oddity: the fact that Aquarius, a sign with Water in its nickname, resides in the Air division. This is actually quite logical if you think about it: although Water Carriers do interact with water, they must do so in an environment surrounded by air. If they were in water, there would be nothing to carry, and the bucket (or other receptacle) would just be floating around, and thus not able to be carried. Maybe someday there will be a bunch of elite players born between the months of January and February and we'll be able to focus only on the baseball accomplishments of this sign, but 2019 ain't that year.
Posted by Pankin at 7:37 AM 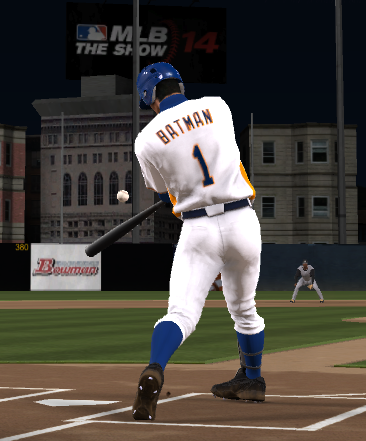